6 November 2009
Goto comments Leave a comment
While exhaustion is knocking on my door tonight, I still feel the need to post at least a short note about today.  At about 1:30 this afternoon, I thought I was “done.”  I was ready to give the horses away or let them loose on Barb Ellison’s property up the road (seriously, her horses live better than the average American!).  I was ready to take Dr. Fisher up on his offer to take the dogs.  I was just ready for something to go right!
I managed to motivate to go pick up a few bales of grass hay for the Frankster to try, and on my way there, called and made an appointment for Boots to see the vet.  The little turd was having issues with his pee-pee, and wouldn’t let anyone touch his back. In the past, those symptoms indicated a bladder infection or kidney stone.  When Aimee answered the phone, I just about burst into tears.
“How’s your horse?” she asked politely.
“He’s fine – today it’s my f’ing dog!!!”
Silence. It was obvious that she was telling whoever else was at the desk that it was me on the phone.
“Oh MAN, Melissa. Ok, we’ll get you in.”
When I walked into the office later in the afternoon, everyone who saw me just looked at me with those eyes that either said, “Lady, you’re NEUROTIC” or “You poor thing!!!”
I had to fight back tears when Dr. Fisher walked into the exam room.  I think he sensed that, because he was exceptionally kind.  After examining Boots, testing his urine, and poking him sufficiently, he decided that Mr. Dingleberry (as he calls Boots) must have been nailed by one of the horses.  Thinking back, I remember Boots howling at Frank yesterday; I had just assumed Boots was being his usual dominating self, but now, I’m pretty sure Frank had whacked him.
Of course, I couldn’t be with the vet and not discuss Dr. Frank.  We again discussed all the different possible issues, and came up with a few ideas, but nothing solid yet.  We’re putting him on Probiotics for a while to see if that will help.  The fecal and urine tests should be back from OSU tomorrow, at which point we may know more.  There’s a slight chance that it’s simply an allergy…let’s hope.
When I got back to Deer Park, I headed over to the barn to drop off the probiotics in the feed shed and check on the boys.  As I rounded the corner and looked into the field in front of their stalls, I about fell over.  There in the middle of the area I usually ride in was a round pen — all assembled!  I had known that Gabby was going to come out to exercise Avdou for me, and remembered that she had mentioned that her old round pen was leaning up against her barn. But I never in a million years would have imagined that she would go through the effort of loading her truck, unloading her truck, and then setting it all up without even a mention.  I nearly burst into tears.
There are moments when I realize that the hard times that I’m going through are really part of a bigger picture.  It’s so easy to get stuck with the stress that overrides my daily tasks, losing sight of all else.  Gabby reminded me of that today with her kindness.  I needed that gesture of warmth, of care, of encouragement – and it was tangible.  That round pen means more than just a place to exercise the horses; it brought strength back to me somehow.  It reminded me that while I’m challenged by the circumstances in my life, there are people who ARE genuinely understanding, who are also willing to stretch themselves, to feel and sympathize with others, to extend a helping hand – and without even being asked.  Thank you, Gabby, for having a heart of gold.  Thanks to all of you who have offered encouragement throughout the last few weeks!  I really am blessed to have you all in my life! 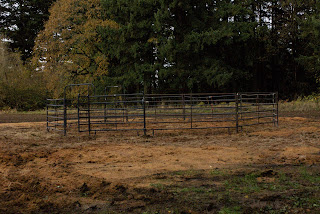 the miraculous round pen
Aside from my time with the horses, dogs, vet, and hay, I was able to start another round of quince jelly, as well as decorate the living room for Thanksgiving.  It feels good to have that crossed off my list of things to do and to have the bounty of fall right in my living room!  Jeffrey was so complimentary of the sideboard arrangement.  He kept saying, “In LA, that would be like $500!!!” I love that he appreciates weeds that I bring in from outside! 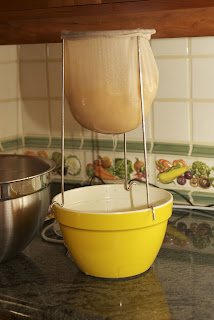 Straining the quince to make juice for the jelly 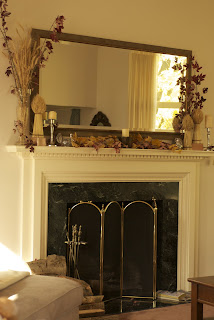 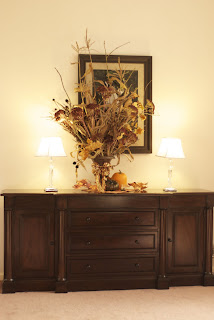 The sideboard – the arrangement is al

l from our garden!

While I was busy adjusting leaves and wheat, Ellie decided to help me out by giving Boots his exercise (with her pajama cape, of course)!  It really was precious to see the two of them – even when they weren’t in agreement on where they would go next! 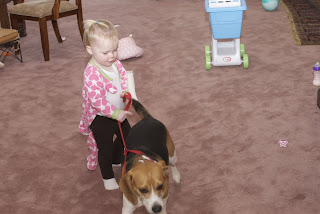 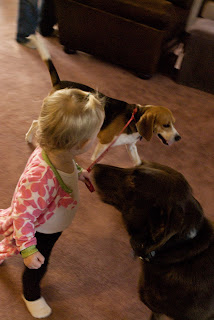 Jax wanted in on the fun! 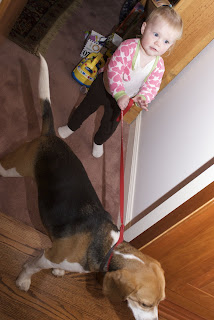 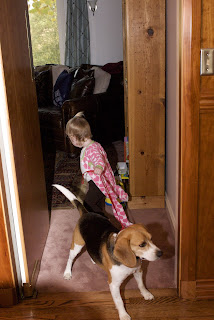 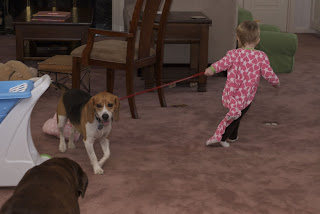 THIS WAY!
Jeffrey returned home tonight – I’m thrilled!  It’s a good start to what I’m hoping will be a fantastic weekend!
RANDOM PHOTOS OF THE DAY 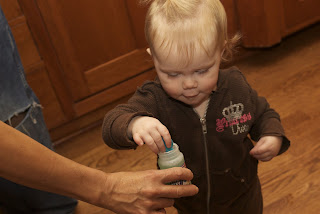 Blowing bubbles all by herself! 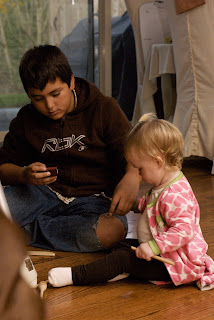 Yovani had the day off from school today, so she had a playmate!