14 December 2009
Goto comments Leave a comment
Throwing my hands up in the air, I turned to Jeffrey, “Should I even bother with the blog?!?!”  Sometimes, I’m not really sure why I write.  When Jeffrey’s in San Jose, it’s a way to keep him updated on my day, and how “the Bear” (EG) is doing – but when he is here and around and following the insanity, I sometimes lose motivation to write.  Or maybe it’s that I just don’t want to see everything in writing.  I’m not sure, but I haven’t been carrying the camera around as much since I broke the lens protector, so it’s hard to figure out the story line for everything that has happened.
Yesterday was seriously challenging.  We had a wonderful morning having brunch with friends, laughed tons, and just had a good ol’ time.  It was when we got home that things got crazy.  We only had  two hours before we needed to leave for the airport so Jeffrey could catch his flight, and we needed to get our tree.  We decided that Jeffrey would go alone, and I’d stay with EG so she could take a much needed nap.  After getting Ellie to sleep, I headed into the kitchen and checked my email… 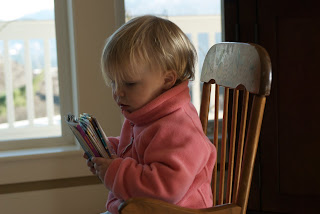 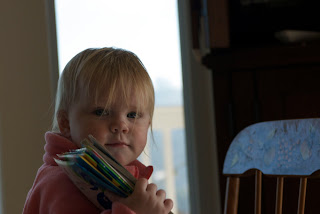 That’s when things got bad.  After moving the horses to their new home and getting them settled in, the owner of the barn sent an email saying that the price that I had expected to pay wasn’t enough, and in fact, the difference between what I had expected to pay and what she wanted was rather large.  Which means now we’re back to looking for a new place, and while there are several options, we haven’t decided where we’re moving to – so we may just bring them home for a bit again.  I feel bad for the boys, as they were enjoying being out in the pasture all day long, and will once again have to adjust to a new place.  I just can’t justify paying far more than what the going rate is for self-care facilities – and I can find all the same amenities elsewhere for what we’re willing to pay.  Obviously the owner can charge whatever she wants, we just won’t board there. 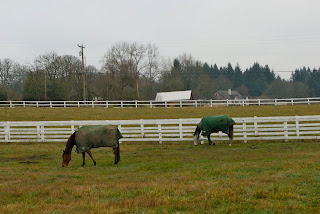 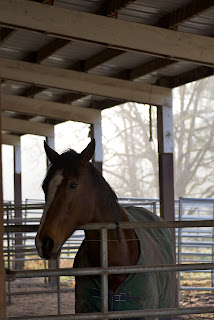 While I was reading the email, I started clenching my jaw (something I commonly do when sleeping or stressed).  I clenched harder and harder and harder, then suddenly I heard a “CRACK.” OH CRAP!!!!!!!!!!!!!!!!!!  I broke a crown on my upper left side.  Spitting out the pieces of porcelain, I just shook my head.  This is ridiculous.  Thank goodness there is no pain associated with it – I just keep thinking, “Why couldn’t this have waited until after the first of the year so that our insurance would reset.” Damn it.
Once EG woke up, I headed over to the barn to feed the boys.  Meanwhile, Jeffrey came home with our tree and Victor, and they set it up.  It’s 12′ tall, and about 6′ in diameter. It’s MASSIVE, and smells amazing!  We overpaid by a million dollars (fellow Oregonians, DON’T ASK – we won’t tell!).  As Jeffrey was adjusting things to make sure it was straight, I came home and looked at my watch.
“Um, Jeffrey? We’re late. You’re going to miss your flight.”
We started running around like mad trying to get out the door.  By the time we dropped Victor off at his house, there was only an hour and 5 minutes until Jeffrey’s flight was supposed to take off.  There was just no way we would make it.  He cancelled his flight and rebooked for Monday night.
“Ok,” he said, “Let’s just try to salvage the night. Let’s go get food.”
Off we went to Famous Dave’s to get take out.  That was a mistake.  For the second time after eating from there, Jeffrey’s belly did NOT respond well.  It rumbled well into the night, and we just shook our heads saying, “Well, it fits the way the day went!”
At about 4 am, we awoke to the sound of a dog peeing on the carpet.  Jeffrey yelled, “NOOOOOOO!” and turned on his light.  What we saw was just awful.  Boots was trying to run out of the bedroom, but his hind end was just dragging behind him.  He couldn’t move his legs, and he was shaking in pain.  I scooped him up and took him to the garage just in time for him to poop, pee, and vomit all at the same time.  It was the third time that it has happened in 2 months.  I put both the dogs in the garage, bundled up and joined them for a while.  Boots couldn’t stop shaking, his eyes rolled into the back of his head, and he whimpered until he fell asleep.  I crawled back into bed around 5 am.
The first thing I did upon waking in the morning was head to the vet with Mr. Boots the Beagle.  I dropped him off so they could observe him, but he was moving normally and behaving like any ol’ beagle at the vet would.  When I went to pick him up again, the vet said she couldn’t find anything abnormal, but when I started telling her all of the symptoms, she got a look on her face that said, “Crap.”  I hadn’t talked to her directly when I left him, so I think there was some info that slipped through the cracks (like the fact that his hind legs couldn’t move).  Long story short, we’re pretty sure he’s got a compressed disk.  Unfortunately, the only way to confirm the diagnosis is to do an MRI – which is $2,000.  NOT happening.  AND if it IS a compressed disk, they would simply treat it with steroids until it got so bad they would need to do surgery – and the surgery would be another $2,000.  I’m not sure about you, but I don’t have that kind of cash laying around.  I feel so bad for Boots.  He’s been in a considerable amount of pain over the last year, and while we have tried to figure out the problem, it took this to help us figure it out. &n

bsp;I do feel better now, though, since I feel like there’s some sort of answer.  I always say to Jeffrey that I think the vet’s office thinks I’m hyper sensitive about the dog, but now that we have this diagnosis, everything that I’ve been taking him in for makes sense.  While we thought it was bladder issues, it was actually his spine.  The vet sent me home with muscle relaxers.  I hope it helps. 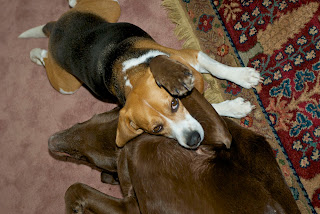 How can you not love a face like that!!!
I’m happy the day is over – the vet, the dentist, the vet, the airport, and then filling orders for gift baskets – and I’m still not done!  It’s 11:30, though, and all the other stuff can wait….send some good thoughts to Boots, will ya?

One Comments to “Vets, Dentists, and Insanity”