2 November 2009
Goto comments Leave a comment
I’m sitting on my bed, staring at some kind of bee huddled where the window frame meets the wall.  It hasn’t moved, flinched, or stirred the entire time I’ve been here, and instead of jumping up to remove it, I just keep thinking how representative of this time of year that little guy is.  The cold has hit, the busyness of the summer and harvest time has passed, and now all we want to do is huddle and rest.  For him, he has done his job, it’s cold, and now it’s over!  For me, I just need a day or two to regain my strength, and tah-dah, I’ll be at it again.  I’ll probably regret my decision to not take the bugger outside, but I just can’t bring myself to move him! 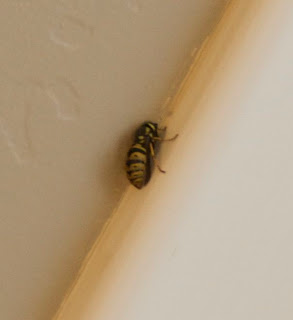 It was definitely a challenging day for me.  It started out well enough.  Ellie Graye woke around 7:30 am  in a great mood, and we had a relatively smooth morning.  When I went out to feed the horses, I noticed Frank had eaten all of his hay, which I thought was a good sign.  We headed out to swimming, and that was wonderful as usual.  When I returned and went over to take the horses blankets off, however, things took a turn.  Frank was so incredibly swollen everywhere.  His edema was larger than a few days ago, and his legs and sheath were again huge.  Upon taking his blanket off, I gasped.  He has lost even more weight.  I don’t understand it.  He’s eating 20 – 30 lbs. of hay (most horses only need 10 – 15 lbs.) and 16 – 20 lbs. of Senior Blend feed (specifically formulated to provide complete nutrition so that hay isn’t even necessary).  I had already planned on driving over to the vet to return the unused GastroGard (the $55/day treatment that wasn’t working), so off I went.  Neither Dr. Fisher nor Dr. Aschim were working, but Dr. Tripp happened to walk in, and apparently knew all about the situation, because before I even said “hello” she asked me how he was (I guess in that aspect, the constant need for their services pays off).  I gave her an update, and after reviewing all his test results (low protein, low white blood cells, high calcium), she just shook her head and said she’d talk to Dr. Fisher.  Long story short, Dr. Aschim is going to come out on Friday and take some more blood to run some more tests.  It’s just not making sense at all.  I am sick over the whole thing, but at least he’s in good spirits and doesn’t seem to be in any pain.  It just kills me to see him wasting away…seriously, my heart hurts. I just pray to god it’s not stones, because then I’ll have to make a really really really tough decision, because the only way to remove them is to take him to Oregon State to operate…and we just can’t afford that!  Pray for a miracle, huh?
My worry about Frank has pretty much overshadowed every activity and task of the day.  I’ll find a little something to smile about, and then it’s like an anvil drops on my heart, and I go back to thinking about my horse…BUT, we were able to clear out all traces of Halloween, and pack it all up neatly and take it to the shop.  The living room is a clean slate, ready to celebrate Thanksgiving! 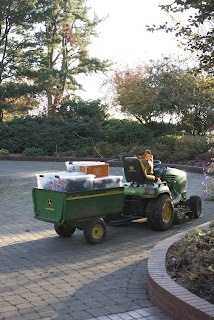 Our little John Deere keeps this place running!
It really was an amazingly beautiful day: clear, crisp, and clean with a hint of the scent of wet soil wafting through the air.  When the sun started to set (at 4:30 thanks to the time change), it really was spectacular!  As I walked away from the horses, I took a deep breath, and tried to focus on enjoying the good as well as feeling the weight of concern for Frank. 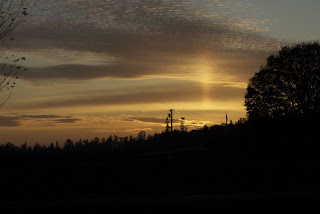 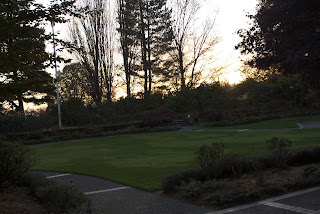 The front yard seemed to glow.  I don’t know my camera well enough to figure out how to capture the feeling!
The moon was out by the time I left to take Victor and Lorena back to their house.  Ellie Graye started exclaiming, “Ba! Ba!” – her word for “Balloon.”  I do believe that it’s the first time that she has been aware of the moon.  All the way down Wilsonville Road, we played peek-a-boo with it, asking where it went as it hid behind trees and shouting, “BOO!” when it appeared again.  The range of emotions between the coming and going of the “Ba” was striking: elation at its sudden appearance, and devastation when it left.  I guess that’s what I’ve spent so much time learning throughout my life journey: how to find the middle ground while still acknowledging both emotions, so that neither one is disabling! 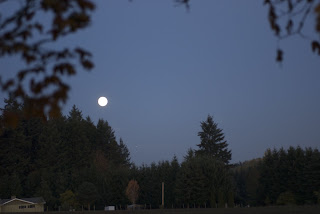 I came home and did what I
often do to relieve stress. I cooked.  Since it was just me and the bear, I chose a rather simple recipe that was easy to adjust for only one person (plus a tiny munchkin):  Steak and Veggies with a wine sauce.  I sautéed some polenta, and there we had it, a delicious meal and tension dissolver in one! The zucchini, tomatoes and onion were from the garden. 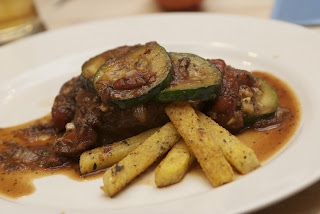 I’ve decided that I need to start a second blog that will simply be dedicated to recipes.  It’ll make organizing my posts so much easier, and searching for recipes when you want them should become far more simple as well.  Thus, Deer Park Farms – The Recipes.
Keep up the feedback – I’m just learning here!
RANDOM PHOTOS OF THE DAY 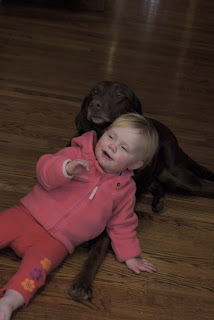 Seriously, this dog is amazing. 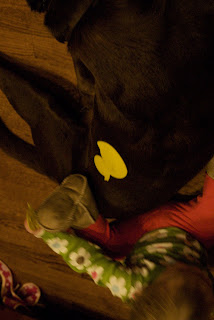 EG was trying to stick her suction cup ducks to Jax 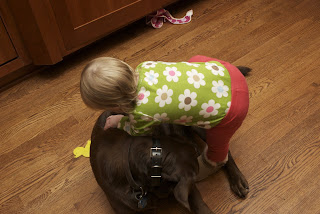 Then she gave up, and just crawled onto Jax’s back 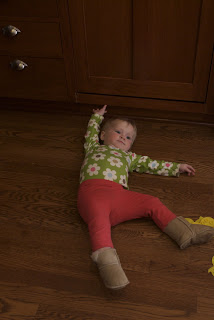 2 Comments to “Worry and Wisdom”