Vets must love me. Seriously, it’s got to be running joke amongst them seeing how high I can get my bills.  It’s either that or my dogs and horses are trying to say I don’t write about them on here enough, and they deserve more attention.  I could see Boots and Frank both pulling a “Click, Clack, Moo” situation, can’t you? One day I’ll wake up and Boots will be standing there with a note in his mouth saying he needs more publicity or something.

So, yes, you guessed it – I spent the day yesterday dealing with vets – again.  It ended up not being a huge deal, and one that I could have dealt with alone, but at the time I didn’t know that.  That’s the biggest down side of not having ever before been the primary care giver to my horses.  I recognize something’s wrong, follow my gut, and then even if I know the horse is ok….I call the vet.  I don’t yet trust my instincts.

We really don’t know what happened with Frank – there are a few possibilities, but whatever it was, I apparently did the right thing because by the time the vet arrived, he was doing ok.  Suspicion is “tying up” (where their muscles seize up; it’s basically a charlie horse all over their bodies), but he could also have colicked.  Poor guy.  I think a big part of it is that the cold arrived this week – it’s COLD: cold as in 20 degrees cold.  Cold as in their waters froze overnight.  Wait, their water froze? Yeah. Another thing I’m sure that was a contributing factor – he had to have been a bit dehydrated.

Today we’re trying to fix that.  Jeffrey woke up early to go rent a trencher so that we can run water and electricity to their stalls.  Victor brought along a friend, and they’re hard at work in the freezing cold.  We’ll see how it goes and if it works! 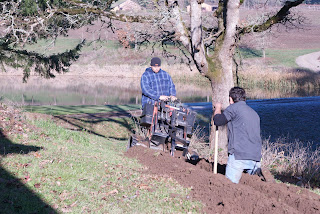 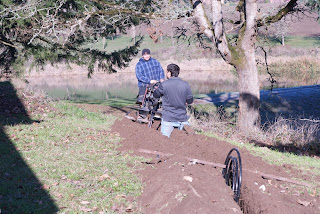 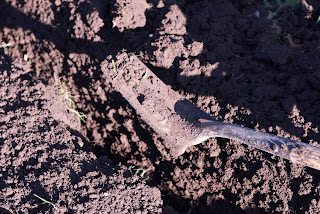 Victor cut an old shovel to fit the trench 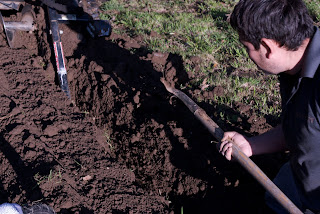 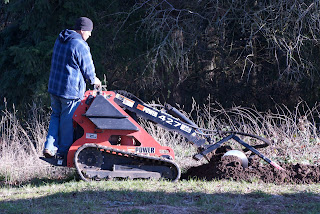 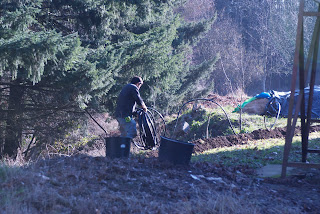 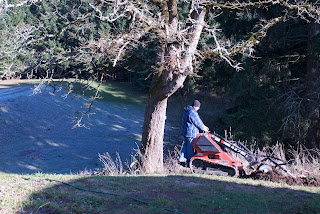 I’m so frustrated with the horse situation.  Avdoo is 6 now, and is barely started. I was making great progress with him over the summer, but now that the bad weather is here, I have no place to ride him because of the mud.  They sink about a foot every time they take a step.  With no extra cash lying around to fix this problem, I’m basically in the worst possible situation for being able to give them the exercise that they need.  Avdoo is very level-headed, kind, smart, and laid back – he’s not the problem.  It’s Frank.  Having to have him on a high-protein, concentrated diet has given him so much energy, he’s coming out of his skin.  I can’t leave one horse in their stall, and take the other because whoever is left behind freaks out – rushing around their stall, bucking, kicking, neighing, and essentially throwing a fit.  Taking both of them out has presented quite the challenge because Frank practically jumps ONTO Avdoo, which makes Avdoo spook, and then it’s just chaos.  So where that leaves me is, well, in a pickle.  Full-training is what they need, but that’s out of the question.  So what’s there
to do. Who knows. We’re just taking it day by day.

No Comments to “Farm Days”